By the Library of Thor!

I recently uploaded to github a C++ template library called Thor, which is something that I've been playing around with. It's really just a way for me to write some crazy template code--a creative outlet if you will. This blog post is meant to show off some of the things that I'm proud of in Thor. The name Thor came in part because of inspiration from Andrei Alexandrescu's template library Loki and his book Modern C++ Design (an excellent advanced C++ book).

Some things in my Thor library are just me implementing things in the way I would if I had full control, and some are a slightly different take on popular concepts. Some things are already outmoded based on offerings in C++11 (especially in terms of atomic support), but are included for posterity.

I apologize that the code samples are images (Blogger currently doesn't do well with template syntax), but generally a link is provided to the code on github.

The C++ standard library includes several standard, well-known and well-documented containers, however these containers don't often allow for much customization. For instance, std::vector (up until the C++11 standard) had no obvious means to free memory (C++11 adds the shrink_to_fit() function). Although not technically correct, I'll refer to the C++ standard library as STL below for brevity's sake.

Thor's string class works very similarly to std::string and std::wstring with a few changes. First, the strings are atomically reference counted, so the underlying string data is shared when possible. Secondly, a template parameter can be specified to pre-reserve (as part of the basic_string instance, not a separate heap allocation) space for the string. The default of zero is a fully dynamic string, but if you need a quick string on the stack and don't want to allocate anything from the heap, it is easily done with the addition of a size template paramter:

Furthermore, in addition the STL constructors for basic_string, additional options are available for printf-style formatting and literal strings (that don't require copying or allocation): 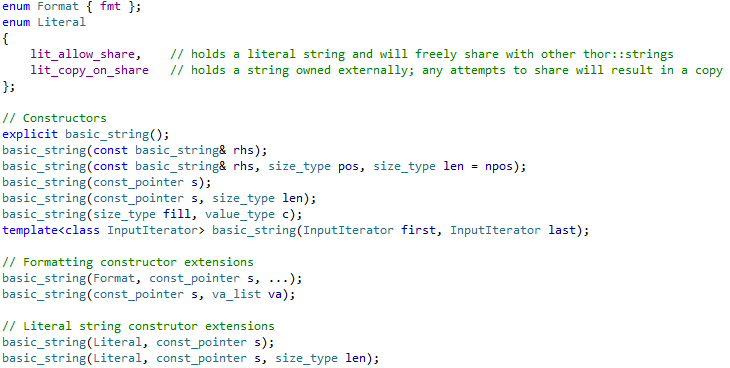 The printf-style formatting is also supported for append, insert, replace and assign variants. 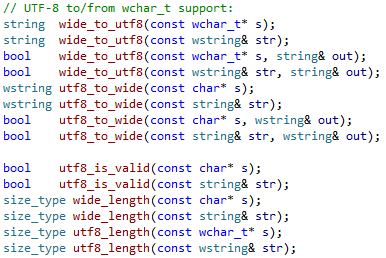 In general node-based STL containers (such as std::list) will allocate a 'dead node' or a terminator node from the heap as soon as they're constructed (even default constructed). Usually this terminator node will include space for the 'T' stored type, although that space will never be used and therefore wastes space. I frown upon the fact that wasted space is allocated from the slower heap for such a simple operation as default constructing a list.

This has the advantage of not requiring a heap allocation for the terminator node while still allowing for simple reverse iteration and no need for null-pointer checking at head/tail. However, there are two disadvantages. The first is that any accidental writes to the end() iterator (which is completely invalid anyways) may cause memory corruption. This can be prevented in checked/debug builds with asserts when trying to dereference the end() iterator. The second is that swap semantics require slightly more finesse (although these are more complicated in Thor for another reason explained below). In std::list the swap() function must only exchange pointers and counts between two lists--since the terminator node is allocated on the heap it is not tied to either list and is automatically part of the swap. However, since Thor's list essentially has a local terminator node as part of the instance, care must be taken to fix up the terminators during swap:

Notice that the swap function handles a concept of shareable. This is because of another enhancement of Thor's containers. Essentially, space for a certain number of items can be pre-allocated along with the container, similarly to the string class mentioned above. For instance, thor::list<T,5>

There are many other extensions to all of the containers, yet they all try to remain true to the C++ standard library specification.

The thor::hashtable class (which forms the basis of hash_map, hash_set and the multi- versions of each) has a noteworthy feature: a policy class that controls how the stored values are organized into buckets. The options are a power-of-two system that is very fast by using bitwise masks instead of divide/mod instructions (although this method can be terrible for pointers as keys as they typically are multiples of 4 or 8 and the bucket strategy loses efficiency leading to collisions), or a more traditional (and slower yet less collision-prone) prime-number strategy.

For std::list (or thor::list for that matter), the 'T' type that you're storing in the container is contained within a node that tracks other information for the container. If you had a list of pointers to objects in the heap, then the objects were allocated and the list container must allocate a small node to store the pointer. This is wasteful. The embedded containers can alleviate this by having the node tracking information as part of the object that is being stored. For instance, the 'T' type stored in a thor::embedded_list must contain an embedded_list_link member and the member is given as a template parameter to thor::embedded_list.

The thor::atomic_integer system is similar to C++11's atomic wrapper, so while not completely necessary it was a fun exercise to write. The real meat of how it works is based in the platform-specific interlocked system (the Windows version is interlocked_win). This uses template specialization to handle one-, two-, four- and eight-byte integers. By using intrinsics, these atomic_integers actually compile down to very few inline instructions for most operations. Consider how declaring interlocked

The template parameter T_SIZE defaults to 4 for int, which causes a specialization to be selected:

This specialization uses the correct functions/intrinsics for the numeric type that we're wrapping in atomic_integer. This allows atomic_integer to do the correct operation based on size of the integer parameter:

Another place where Thor uses template specialization is with memory alignment. All of the containers do memory allocation through Thor's memory functions. There is a simple class called the align_selector:

This class's only job is to determine if an object can use system-guaranteed alignment or not (most objects can). If the system alignment will suffice, alignment_selector::alignment will be zero. The align_alloc class uses the align_selector as a default template parameter to select the proper specialization for the alignment: 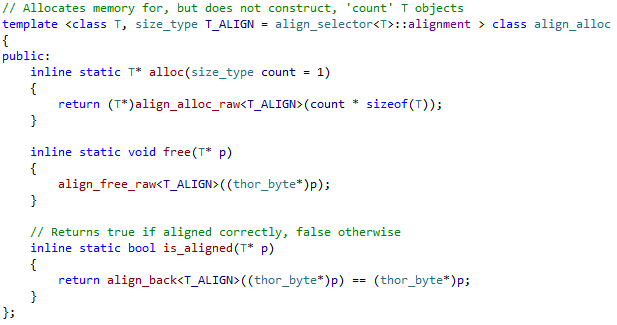 But the default version that handles non-default alignments will over-allocate and offset:

Arguably, this version could use _aligned_malloc or memalign or similar, but by using new[] an application may still override new and use their own memory manager if so desired.

There is a lot more to the Thor library. Take a look at it on github and let me know what you think.
Posted by Joshua Kriegshauser at 12:36 AM 2 comments